Yamaha NS-5000 revists a classic with a Modern RedesignCategories: Speakers

In the late 1960s, Yamaha created the NS (standing for Natural Sound) range; originally borne out of development for their electronic keyboard instruments, the NS range spawned more than a few legendary loudspeakers. The NS-10, for example, became the de-facto near-field monitor speaker for decades.

Perhaps less well known, but equally as important, was its big brother, the NS-1000; launched in 1974, the NS-1000 and it’s professional version the NS-1000M was not an immediate success. Its adoption as the official monitor loudspeaker by both the Swedish and Finnish state broadcast networks, however, ensured its success and place in history.

A quick glance will immediately reveal the design influence from which the NS-5000 draws. Both the NS-1000 and NS-5000 are of similar size and configuration, being substantially larger than ‘bookshelf’ speakers (dedicated stands are available) and also featuring an offset, three-way driver layout.

Ah yes, those drivers; one of the key strengths, yet also the Achilles heel of the original NS-1000 loudspeakers were its Beryllium dome tweeter and mid-range unit. Whilst Beryllium offers great advantages in the form of immense lightness and stiffness, it is very difficult to work with, and also, highly toxic.

For the NS-5000, Yamaha has turned to a material called Zylon, an exotic material, used by both NASA and in Formula 1. It is both lighter and stronger than Beryllium and is used for both the HF and mid-range domes and Woofer diaphragm of the Yamaha NS-5000.

Additional, resonance suppression chambers are installed behind and integrated with the tweeter and mid-range drivers. These R.S. Chambers, as Yamaha, refers to them, help in damping unwanted resonances at the source, removing the need for aggressive internal damping. 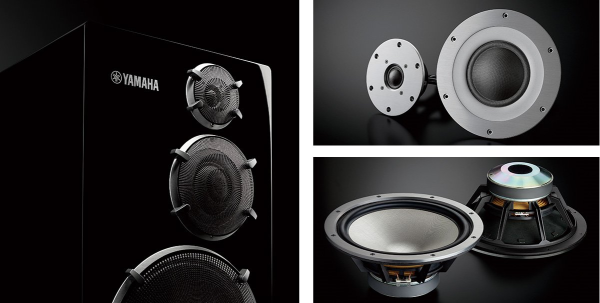 As a manufacturer of some of the world’s finest instruments, it should be no surprise to learn that the cabinet design and finish of the NS-5000’s are truly world-class. Few manufacturers can define their cabinets as possessing a ‘Piano Black’ finish, in the way Yamaha can.

The cabinets themselves are manufactured from Japanese white birch plywood; absolutely no fiberboard or chipboard here! Yamaha researched the acoustic and strength characteristics of a number of materials and settled on birch ply, which is painstakingly selected to be knot and void free.

As a traditional, multi-driver tuned enclosure, the NS-5000 thrives on power; this is definitely a speaker to partner with a powerful amplifier. With an 88db sensitivity and a power rating of 200-600w, wimpy amplifiers need not apply!

The upshot of the tuned enclosure is a frequency response which is substantially flat throughout the frequency spectrum; Yamaha quotes a wide frequency response of 26Hz to 40kHz. Add that to the incredibly neutral and accurate cabinet construction, and its a recipe for a world-class Loudspeaker.

Hot off the presses, comes the news that Hi-Fi Choice has just awarded the Yamaha NS-5000 an ‘Outstanding Product’ award. “Its balanced, seamless portrayal is extremely rare, yet its powerful demeanour ensures high levels of sound are carried imperiously (…) In short, Yamaha’s new flagship is altogether better equipped for today’s hi-fi world.”