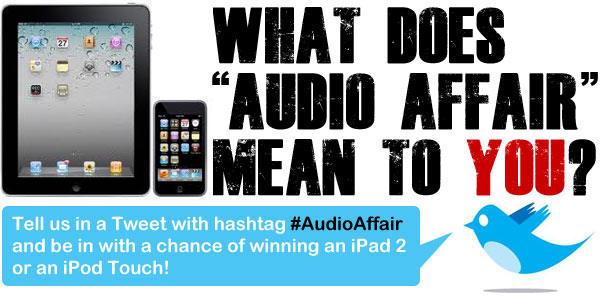 There are no right or wrong answers, but if we like your Tweet, if we really really like it, we will award you with an iPod Touch (8GB/4th Generation). One winner per day from 1st June to 3rd June.

How to Win The iPad 2

During the 3 days from 1st June to 3rd June, the iPad 2 (16GB/Wi-Fi only) will be awarded to the first person who gets their Tweet retweeted by a celebrity*, which must also contain the hashtag #AudioAffair.

*For the purpose of this competition, the definition of a celebrity on Twitter is an individual who is well known with at least 250K followers. Please also note: You should only tweet once per celebrity to avoid spam.

COMPETITION NOW CLOSED – THANKS TO EVERYONE WHO ENTERED.

2 thoughts on “Win an iPad 2 and iPod Touch”