Turn any Hi-Fi into a Network Streamer with the Yamaha WXAD-10Categories: Hi-Fi, Streaming

The Yamaha WXAD-10 Wireless Streamer is a highly affordable, simple solution to adding streaming audio to virtually any Hi-Fi or audio device. Indeed, it’s so simple and so accessible you may be left wondering why someone hasn’t done this before.

OK – for those of you throwing rotten tomatoes at your screens, we’ll acknowledge the ‘Elephant in the Room’ with that last statement. Google’s Chromecast offers similar functionality. However, to this blogger’s knowledge (and please do comment if you disagree), no-one has previously offered an audiophile grade streaming unit before, at this price point.

If you have a Hi-Fi system, ‘all in one’ system, a pair of powered speakers, essentially anything with a spare stereo line-input, the Yamaha WXAD-10 will bring that system bang up to date with the latest streaming technology.

With my ’21st Century Tech’ hat on, let’s check out what makes the Yamaha WXAD-10 such a promising little grey box…

Upon first glance, the Yamaha WXAD-10 appears an unassuming little box; Yamaha claims the WXAD-10 features “a matte finish, like that of fine ceramics“, and was “designed to match any décor and radiate a quiet presence”. Let’s just say that the WXAD-10’s appearance is benign and inoffensive, and leave it at that. 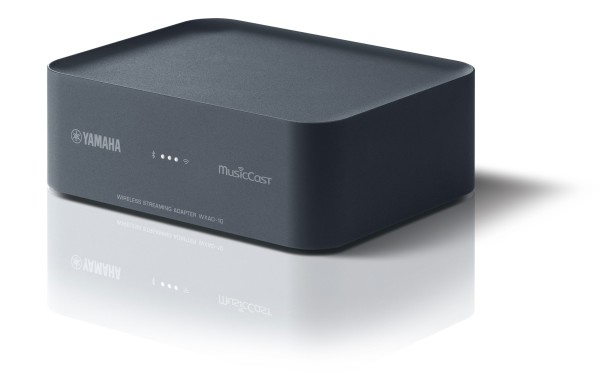 Simplicity is the name-of-the-game with the WXAD-10, with a simple offering of physical connections in keeping with its diminutive size (it will just about fit in the palm of a hand) and diminutive price (£149!). Equally, the extent of any data readout is represented by three, white LED’s on the front panel of the unit displaying power, Bluetooth and wireless connection status respectively.

Just four sets of connections can be found on the back of the unit: A conventional pair of analogue stereo RCA outputs, a 3.5mm stereo output, an Ethernet port, and a USB power connection port. It would appear the mantra here is definitely ‘less is more’.

The Yamaha WXAD-10 is The ‘MusicCast Add’

It might seem an odd title, but that’s Yamaha’s unofficial title for the WXAD-10; a title which is pretty much spot-on in terms of the WXAD-10s intended purpose. It very simply ‘Adds’ MusicCast functionality to any connected device. But what, you may ask, is MusicCast when it’s at home?

MusicCast is Yamaha’s proprietary music streaming and networking app, designed to work in conjunction with Yamaha audio equipment supporting the MusicCast protocol. MusicCast is a devilishly clever system which allows the user, via an Android or iOS device, to stream music to single or multiple units. Whether it’s locally stored music on the network, streaming services such as Spotify, Deezer & Tidal, or internet radio – MusicCast has it covered.

Much like some considerably more expensive systems available, MusicCast allows the user to assign and label MusicCast devices to multiple rooms. The user may then choose which audio sources are heard in each room, or indeed, stream one audio source across all rooms simultaneously.

For those who just want a simple device for one room, the WXAD-10 will also function as a simple, Bluetooth connected audio hub. The options are myriad and accommodating.

Audiophile Quality at a Budget Price

The Yamaha WXAD-10 supports up to 24 bit, 192kHz audio from uncompressed sources such as WAV, FLAC and AIFF. This might not count for much, without good D/A conversion. Thankfully, Yamaha has chosen to use a Burr-Brown DAC coupled well thought out analogue circuitry. This really is a unit designed to appeal to the Audiophile.

At the price-point, this has to be something of a ‘no-brainer’ for those wishing to add networked audio to their home. It’s also a good excuse to dust off some of those unloved components banished to the loft (yes – you’re not alone) and give them a new, 21st-century life.