Yamaha’s Flagship A-S3000 Integrated Amplifier sits atop Yamaha’s range; a handcrafted nod to Vintage audio incorporating the finest modern componentry. As a dedicated fan of vintage audio, plus an experienced user of Yamaha’s pro-audio equipment, I was extremely excited to learn more about this beautiful integrated amplifier.

Vintage audio, for a dedicated enthusiast such as myself, represents the ‘golden era’ of two-channel Hi-Fi. Pioneering designs built without compromise, designed by engineers who paved the way for the high-end audio we love today. Sadly, vintage audio, like classic cars, often requires deep pockets, a lot of patience or an ability to wield a soldering iron with intent!

It’s with deep enthusiasm then, that we take a look at the Yamaha A-S3000 Integrated Amplifier. 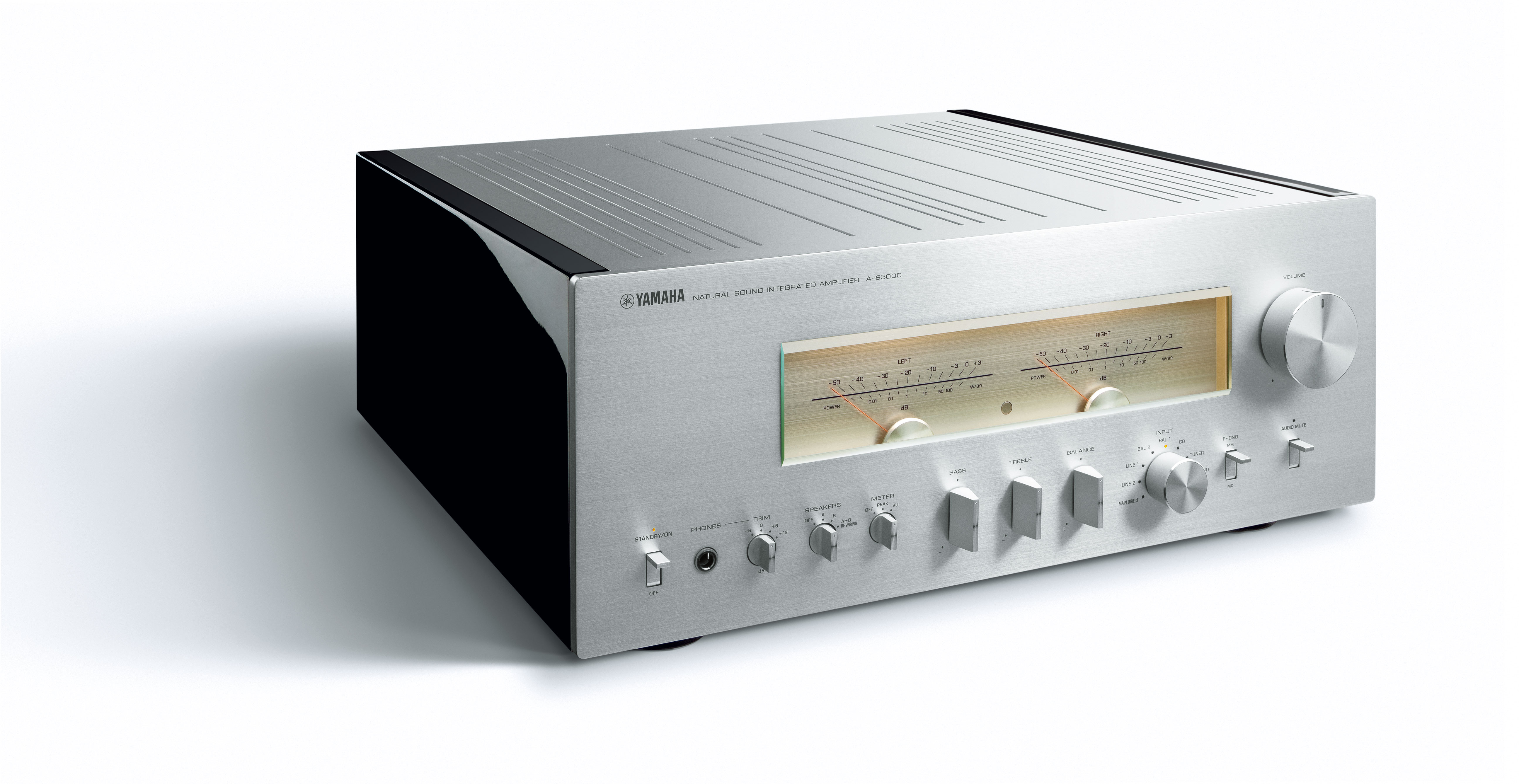 There’s no escaping the beautiful aesthetics of Yamaha’s current Hi-Fi component range. Sitting as the flagship integrated amplfiier in the range, the Yamaha A-S3000 epitomises a timeless, vintage elegance. Available in both black and silver finishes, with a choice of piano black or wooden side cheeks, the aesthetics scream of late 60s early 70s Hi-Fi. The addition of large, back-lit, moving coil meters and chunky knobs and switches enhance the vintage analogue vibe. You’ll find no touchscreens here!

A major downside to a lot of vintage amplifiers, is that they’re often a poor match for modern loudspeakers. That’s most definitely not the case with the Yamaha A-S3000. A whopping 170 watts per channel is quoted at a nominal 4 ohms. Dynamic power ratings are equally impressive however; at 8 ohms the A-S3000 still delivers 120 watts per channel, rising to 300 watts per channel at 2 ohms.

The chaps at Audio Affair tell me they’ve tested this amp with Tannoy Kensingtons and found the match to be magical. Anyone in search of a vintage themed Hi-Fi setup would do well to check out that pairing!

Quoted audio specifications are outstanding, indeed a whole blog could be devoted to those alone. Here’s a few standout specifications though: phono input s/n ratio 93db with .002 THD. Power bandwidth 10Hz to 60kHz at 0.1% THD. Make no mistake – this is a serious piece of audio.

Yamaha have invested great efforts in the design and build of the A-S3000; a multi-layer internal chassis structure featuring extensive use of copper plated and non-ferrous metals has been employed to reduce mechanical and electrical noise, to great effect. A large torroidal transformer is employed coupled to a three dimensional frame, ensuring huge power supply grunt.

Yamaha have made great efforts to approach the lowest internal impedance possible. To this end, high voltage connections are screw terminated (as opposed to cheaper crimped spade connections) . Signal and power routing paths have also been designed to have as much physical separation as possible, with signal cabling running beneath the multi-layer chassis. 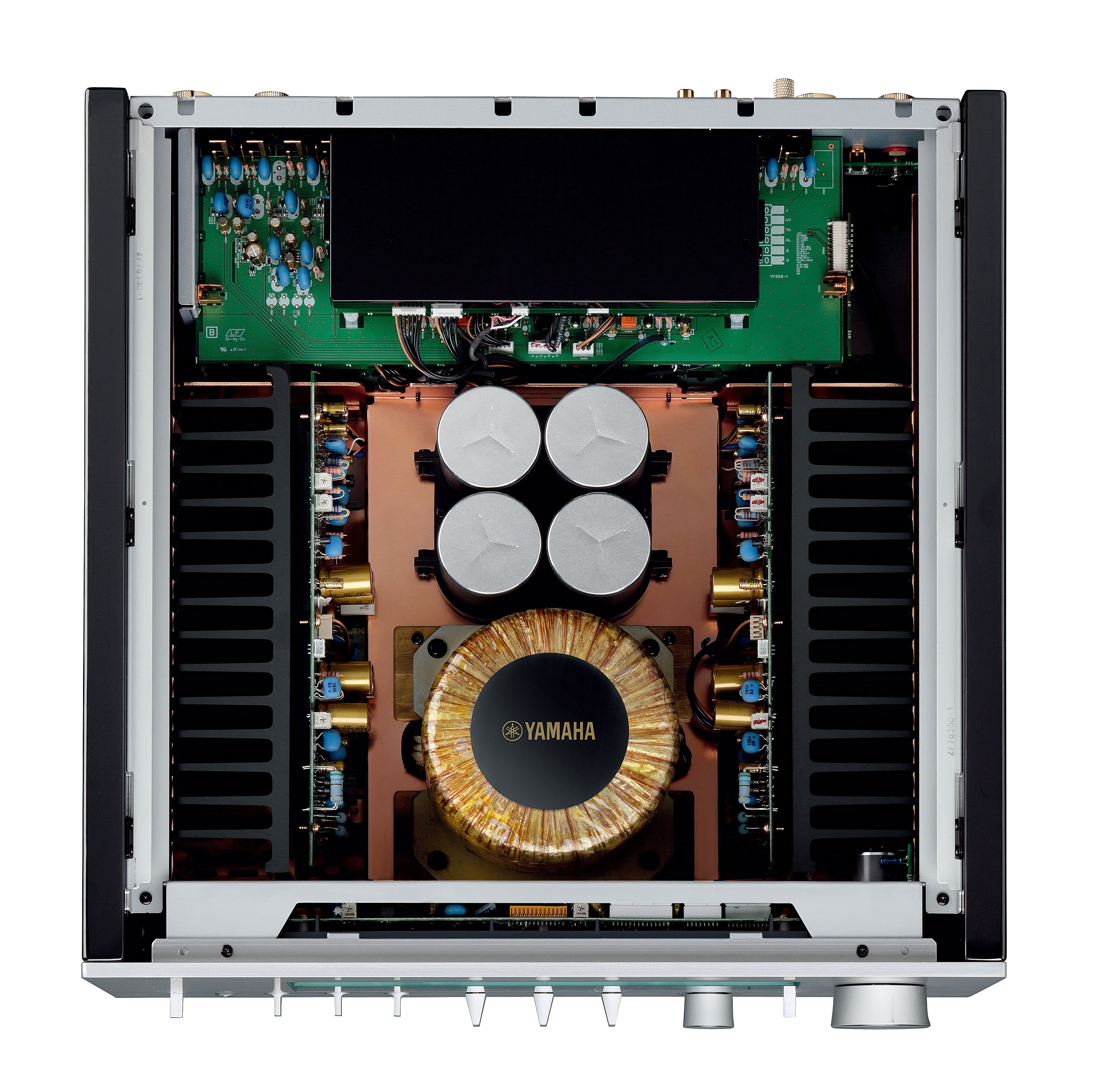 Phono enthusiasts will rejoice at the inclusion of both MM and MC phono stages, which can be switched via the front panel. The celebrations will continue when it’s revealed that Yamaha have chosen a discrete topology for the phono stages (just like high-end mixing consoles). The gain stages and EQ correction networks are also totally independent. Wonderful!

It should be clear by now then, that Yamaha have produced a modern amplifier, for those of us who are still firmly dedicated to the world of quality analogue audio. If your setup features vinyl, tape machines and a mid-20th century aesthetic, then this 21st century addition to Yamaha’s product line comes highly recommended.