Primare PRE60 and A60 pre and power amplifiers represent the flagship offerings from the Scandinavian purveyors of high-end Hi-Fi. Unfortunately, though, they won’t be around much longer!

Those looking to grab the PRE60 and A60 combination should act quickly, however, as this flagship combo won’t be available for much longer… 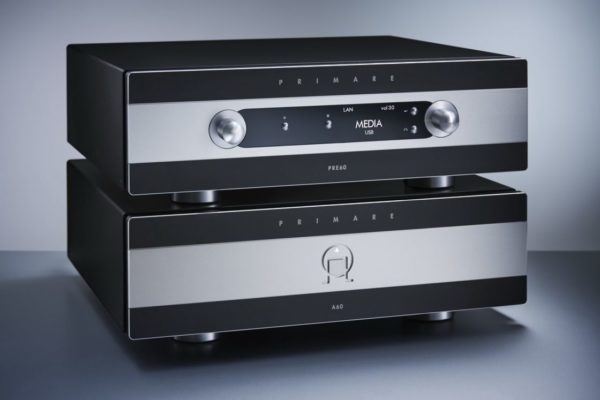 Four years ago, Primare signalled their return to the ultra high-end Hi-Fi component market with the PRE60 and A60 pre-amplifier and power-amplifier combination. The pairing formed part of Primare’s Reference 60 range, intended to sit at the very top of their range of two-channel Hi-Fi components.

With this news, coupled with our current extraordinary offers on the PRE60 and A60, it seemed time we reminded you of the outstanding features and technology incorporated into Primare’s flagship Pre-Power combo.

Primare’s aim with the 60 Series components and the PRE60 was to build the company’s most modern, revealing and most musical products yet. Entirely designed and hand built in Sweden, the PRE60 preamplifier and its accompanying A60 amplifier (more on that later) is the culmination of Primare’s three decades of producing High-End Hi-Fi.

The Primare PRE60 offers a rare flavour of analogue and digital connectivity which is highly accommodating and exceedingly well equipped: Six pairs of analogue inputs are on offer, two pairs of which are on balanced XLR connections. Digital connections are vast, too, with three optical and one RCA input on offer.

For those seeking computer, network and mobile device connectivity, the Primare PRE60 doesn’t disappoint either. USB A and USB B ports are offered, as are Ethernet, Wi-Fi and Bluetooth connections.

The Primare A60 employs Primare’s unique UFPD (Ultra Fast Power Device) amplification module in a balanced configuration made up of four discrete amplifiers, two per channel. Primare state that their seventh generation UFPD amplification technology allows for instantaneous current delivery and extremely low distortion; all this while delivering an astonishing 1kW power output!

What’s for certain, is that the Primare A60 is one of the industry’s finest power amplifiers; it’s widely regarded as one of the finest sounding power amplifiers of its kind. So much so, it moved Stereophile to write that compared to other comparable power-amplifiers, “Primare’s A60 is of another dimension entirely”.

The chance to sample the magical pairing of the Primare PRE60 and A60 pre and power amplifiers is, sadly, soon to come to an end. Flagship products are often fleeting moments of expression by the world’s greatest, and as is the case here, only available to the discerning for a limited period of time.