Linn LP12 Turntables reviewed and rated. A high-end shootout between the Majik, Akurate and Klimax configurations of one of the world’s most legendary turntables.

Today’s blog stems from a phone call a few weeks ago between your author, and Audio Affair’s founder and MD, Alex Field. It was decided to perform a full-on shootout between Linn’s three LP12 configurations: Majik, Akurate and Klimax. Roughly £30,000 worth of turntables, and an accompanying cast of the best Hi-Fi components.

The results? Astonishing in many ways! Read on for the verdict on Linn’s three configurations of the legendary Linn LP12… 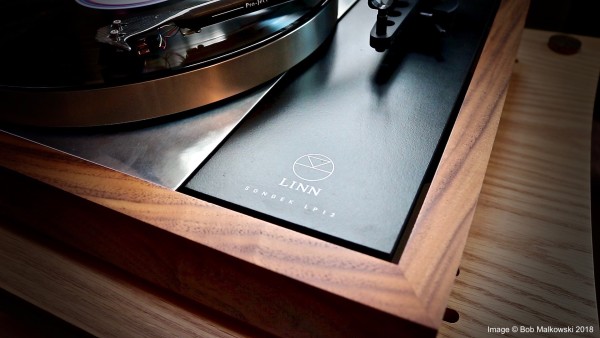 The Linn LP12 is a thoroughbred design with a lineage stretching back over four decades; virtually unprecedented in any field of Hi-Fi or electronics. The LP12 is justifiably an iconic design, and, like most iconic designs there are those who will state the LP12 is overhyped, whilst its supporters wouldn’t entertain any other method of vinyl playback.

As a professional audio critic, it’s your author’s duty to remain as neutral as possible in any audio debate. Having never had the pleasure of personally experiencing a Linn LP12 of any vintage before, the opportunity to perform a shootout on all three current configurations was too great an opportunity to pass up!

Naturally, with decks of this calibre, the supporting cast of equipment needs to be rather special too. Tannoy provided the loudspeakers in the form of their utterly beautiful GRF design, with amplification coming from Yorkshire’s own Sugden. Looking to the Sugden Sapphire range, A DAP800 with accompanying FBA 800 provided the pre and power amplification, respectively.

Where phono preamplification was required, we turned to Trichord who provided their Dino Mk3 preamplifier and accompanying Dino+ power supply. This was, therefore, to be a very high-end, very British, Hi-Fi experience! 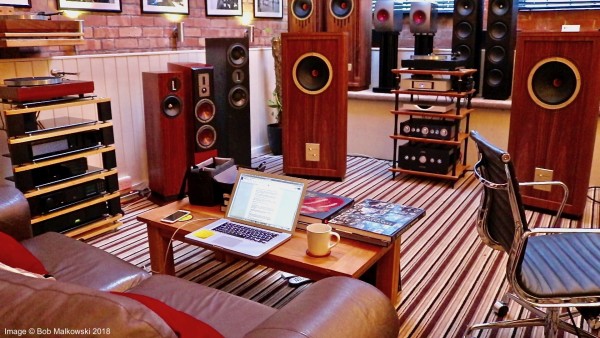 Acclimatising oneself to the surroundings, as well the Linn LP12, the first side of Anna Calvi’s wonderfully atmospheric, self-titled debut album was placed upon the LP12 Majik’s platter. As the opening bars of No More Words ooze seductively from the speakers, an initial impression begins to form. The ethereal, atmospheric aspects of the track float from the speakers. The wires of the snare drum sizzle whilst the breathiness of Anna Calvi’s voice seduces.

As the groove spins on to Suzanne and I the remarkable control of the Linn LP12 (which was to become a noted trait across all variants) revealed itself. The drums are attacking and precise typically associated with digital equipment. Swapping vinyl, Kraftwerk’s Tour De France Soundtrack meets the stylus.

The Linn LP12 Majik‘s noise floor is low – the opening synthesiser stabs and sweeps of the album are always tricky to reproduce on vinyl as they demand fantastic signal to noise ratio and control, something the Linn LP12 is a master of.

Crisp, clean and lively, it’s a performance which complements Kraftwerk perfectly. There is an abundance of detail from the playback, demonstrating just what vinyl is capable of on a quality reproducer. 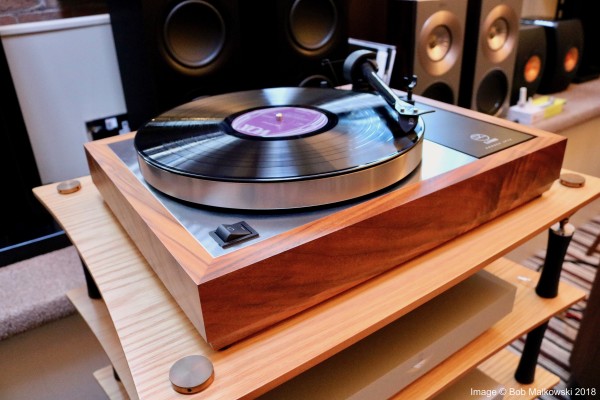 Album after album is thrown at the LP12 Majik with a consistent, repeatable character. AC/DCs gold-standard in rock music Back in Black gives the LP12 Majik a good work out.  For the first time with this track, however, the LP12 legend begins to shine through. There’s a hint of what’s lying under the surface as the snare and kick drum really thump and slam.

If one had to draw criticism of the LP12 Majik it’s the constant impression that the music is being held ever so slightly in check. Like a hyperactive child in class, there’s excitement there but it’s controlled; perhaps a little too controlled for some? There’s also a rather forward upper mid-range character which can perhaps be pointed towards the Adikt MM cartridge?

Keen to experience some of the more rarified configurations of the Linn LP12, the Majik was retired to the sidelines, whilst its bigger brother, the LP12 Akurate stepped into the limelight…

The Linn LP12 Akurate brings with it a host of upgrades: Linn’s own, Akito tonearm replaces the Majik’s Pro-Ject arm, whilst the phono cartridge is upgraded to a Moving Coil, the Linn Krystal. The Kore sub-chassis and arm-board are installed whilst Linn’s external Lingo power supply and motor control unit round out the improvements and upgrades.

Spinning AC/DC’s Back in Black, the difference between the Majik and Akurate is immediately obvious; the over-disciplined child has now been let loose! The bass and drums now positively smash with more energy than the Majik, the low end is deeper, and the top end more extended with more air and space.

The whole presentation is more polished and crucially, there’s now more emotion to the performance, something I occasionally lamented with the clinical accuracy of the Majik. It’s clear, within 60 seconds, that the Akurate is the LP12 taken up a gear, and the effect is hugely entertaining!

It’s time for some Kraftwerk, and again, the LP12 Akurate doesn’t disappoint. The trademark Linn LP12 precision is very much still in evidence, only this time there’s a sense of emotion to accompany it. The presentation is still very clean, with the LP12 Akurate’s name being aptly chosen! Now, however, there’s the characteristic vinyl warmth accompanying the precision one associates with high-end Hi-Fi. 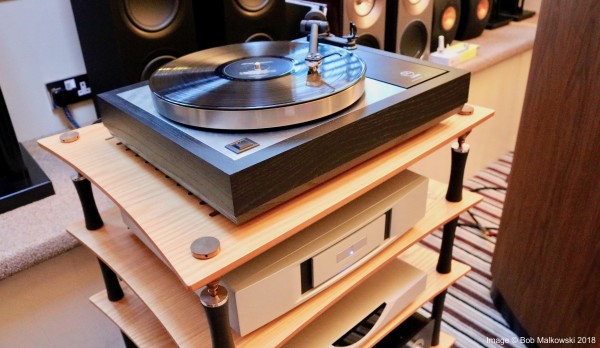 Once again, Anna Calvi graces the platter, really giving the Majik chance to show its raison d’etre. There’s a bloom and grind from Anna’s Fender Telecaster I hadn’t really been aware of before; one really gets the impression of her VOX AC30 amplifier in the corner of the room, all overdriven and growly.  There’s very much the feeling that there’s space for each instrument with tremendous separation and definition.

Deciding to really test the Majik, a rare, historic recording on the VOX label from 1970 of Erik Satie’s Gymnopdie, performed by Frank Glazer, was placed on the platter. This particular record is a huge challenge for any deck due to the huge dynamic range and relatively low level at which the master was cut.

Having previously tried this record on the Majik, the Akurate shows huge improvements. The improved Krystal MC cartridge is probably helping here, acting like a magnifying glass to pull as much detail from those old grooves as possible.

For such an old recording, on an old piece of vinyl, the delivery is hugely impressive allowing one to hear the hiss and imperfections in the master tape rather than the record itself. Groove tracking distortions also seem to have disappeared, leading one to wonder if the accuracy of the stylus tip is able to track the original cut better?

The delicacy of the performance and the nuances held within are reproduced in spite of the limitations of the original recording, resulting in a hugely atmospheric rendition. This very much sums up the true Linn LP12 experience; one
feels moved by the music in a way that wasn’t there with the Majik. There’s more of a sense of drive and rhythm with the LP12 Akurate and a presentation which is altogether more engaging and absorbing.

With a performance as good as this, how can the Klimax improve on what is clearly, one of the finest turntable setups available? It was time to find out!

The moment had arrived to answer the question, “What does a turntable which costs the same as a brand-new sports car, sound like?”. After being given a cautionary warning, “please be careful with the stylus – it’s non-replaceable and the Kandid cartridge is worth £6000”, I (rather carefully) put stylus to vinyl and settled in for a remarkable experience…

What immediately grabs one regarding the Linn LP12 Klimax, is what one doesn’t hear. Without a doubt, the Klimax has the lowest noise floor of any vinyl setup I’ve ever heard which is undoubtedly down to the integrated URIKA II phono preamplifier. A controversial approach, URIKA II carries out the RIAA processing entirely in the digital domain.

The end results, however, cannot be argued with; the output from the Klimax is whisper quiet; taking advantage of the Sugden DAP800 preamplifier’s balanced inputs, the Urika II’s balanced outputs ensure a noise floor, unlike anything I’ve ever heard from vinyl before. It takes the Sugden pre to be cranked fully before any noise is emitted from the Tannoy GRF’s 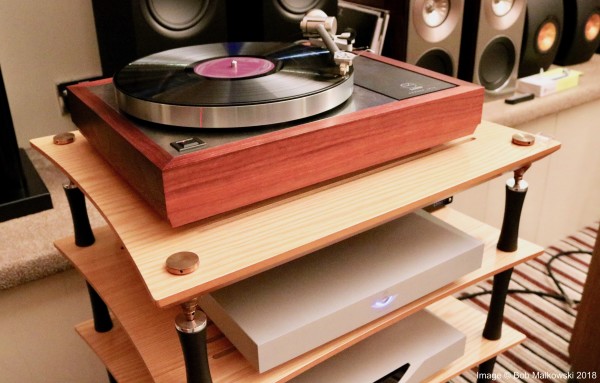 There is literally no turntable noise whatsoever; anyone that says that vinyl is noisy needs to hear a Linn LP12 Klimax. There’s a blackness to the background which is incredible and gives remarkable contrast to the dynamics of music, allowing the notes to jump forth with a more vivid presentation.

Once again, spinning AC/DC’s Back in Black proves that from the first downbeat, the performance is rhythmic and alive; there’s power and speed in abundance, leading to a seriously engaging presentation.

One of this reviewer’s favourite albums for demoing gear is Grace Jones’ Nightclubbing. Having used it as a reference point on the Majik and Akurate, listening to it on the Klimax highlights a combination of sizzle and smooth that’s very unique, but also very appealing and deeply pleasant.

There’s a very lively pace to the performance, with superb separation between instruments and sources. The bass is deep, yet utterly controlled and musical, whilst there’s an extreme high-end air noticeable which wasn’t present on either of the previous Linn LP12 versions.

Rounding off my listening test of the LP12 Klimax, was that tricky vintage recording of Satie’s Gymnopedie. The LP Klimax’s Low noise floor brings you in closer to the original recording than ever before highlighting and unmasking the beauty of the original performance.

So, which of the three turntables is the true “winner”? That is a question which comes down to a matter of budget, taste and ethos:

The LP12 Majik is a superb and affordable route into the Linn LP12 circle and is a proven, all-in-one package, which displays all the Linn LP12 signatures of control, speed and precision, at a fraction of the cost of the LP12 Klimax. As the LP12 platform is so modular and upgradable, it allows access to the world of the Sondek with future improvements possible as budget and taste permits.

The LP12 Akurate truly is a classic LP12 setup; its ability to engage, entertain and wow is obvious from the moment the stylus hits the record. Yes, it’s more than twice the price of the LP12 Majik, but it’s also arguably twice the turntable. Encompassed with the LP12 Akurate, is the fabled “vinyl magic”; it’s all analogue and all wonderful. Highly recommended.

The LP12 Klimax, the flagship, and one of the most coveted and valuable decks available today. Where the Klimax shines is in its incredible levels of precision and accuracy; this is absolutely a deck for those who enjoy listening to their music with a magnifying glass to hand. One can’t but help feel, however, that there may be a certain moral dilemma posed by the LP12 Klimax, knowing that the source has been digitised before reaching the listener.

Whichever version of the Linn LP-12 the customer may choose, however, the listener is assured of purchasing a truly classic piece of Hi-Fi equipment, which will give decades of pleasure and enjoyment.