KEF’s new R-Series is a collection of six incredible home audio speakers made for audiophiles and film buffs alike.

The brand are well-known as the architects behind the Reference range, something of the gold-standard in terms of high-quality, mind-blowingly good speakers. But, with an eye-watering price tag slapped on this most elite of ranges – upwards of £10,000 at the highest price point – such an awe-inspiring product commands a serious investment and is probably out of the price range of the even the most-hardened of audio buffs.

The original KEF R-Series, released a few years back, looked to take much of the sophisticated, unparalleled technology that sat at the heart of the Reference range and place it in products positioned in a more affordable price bracket.

Successful though this range was, 2018 has seen KEF clamber back to the drawing board to re-shape and re-model the much-talked-about R-Series and add a stack of technological improvements. 1,043 of them to be exact. In fact, KEF’s branding for what amounts to a radical shake-up of what came before has been keen to force the idea that “the only thing to remain the same is the name”. 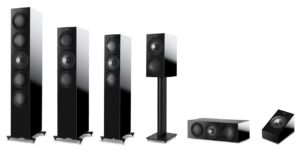 KEF’s new R-Series brings with it six shiny new speakers to explore and, whilst each of them is a unique proposition, there is one thing that have in common: a shared technology.

Embedded within KEF’s new six-strong R-series are the same technological innovations, many of which are derived directly from the prestige Reference Series. Listed below are the features that set the R-Series apart from its past and make KEF’s 2018 home speaker a very different beast to the preceding R-Series.

One of KEF’s most distinctive innovations has always been its Uni-Q driver array, an unmistakable trademark of its technological greatness since it was first unleashed thirty years ago. And it’s certainly the crowning feature of each and every model that comprises the new R-Series. Now in its 12th generation, the Uni-Q’s most recent iteration continues the tradition of housing its tweeter at the heart of the midrange cone. The difference here is that KEF engineers have devised a way of reducing the resonances that the Uni-Q’s unique design can sometimes encourage. Such levels of resonances are minimised by the inclusion of damping material behind these drivers. The result, we’re assured, amounts to a purer, less encumbered and more complex treble sound. As well as an improvement in stereo imagining.

But these additions to the Uni-Q don’t stop there. The often-detrimental effects of speaker design are combatted by KEF’s inclusion of its Reference-style shadow flare technology in its new R-Series products. It might sound mysterious, but shadow flare works as a bespoke surface design that allows the Uni-Q to shine in all its trebly glory. As the tweeter has been cleverly designed not to come into contact with the edges of the cabinet, it reduces the likelihood of diffraction from such interaction between sound and material. This ensures of a more honest sound, free from distortion and colouring. Each plucked string and cymbal strike can now be presented without the unnecessary feedback. Uncompromised music to our ears.

The R-Series’ bass drivers, smartly-constructed from aluminium and paper, also conspire to do away with harmful resonance in a quest for an improved clarity of sound. Performance is improved by taking down the size of these drivers, an additional design advantage as the cabinets in which these are housed are now slimmer and more pleasing to the eye. Expect a precise, thundering and immersive low-end experience when listening through these standout bass drivers.

Further focus is placed on presenting an undisturbed, uncoloured quality of sound with the inclusion of Constrained Layer Damping (CLD) and improvements to the quality of the ports within the speakers. CLD bestows the R-Series with a similar internal structure to that of the Reference range whilst each port has been designed and positioned to make unwelcome resonance a thing of the past.

The R-Series: This Year’s Model(s)

So, what of the individual models that make up the R-Series?

With six new products built for sound-cleansing pleasure, audiophiles and cinematics alike will be spoilt for choice. Of these six, three (the R11, R7 and R5 respectively) take the form of floorstanders. The R3, as the baby of the collection, is the only standmount offered this time around, its smaller build making it the perfect fit for a position next to a bookshelf. The full effects of these products, of course, can be best felt when purchasing them in pairs.

Following on from these are the R2C, a dedicated centre speaker that can be placed at the heart of any home theatre and the R8a, a smart solution that can take the form of a surround speaker if attached to the wall or, when used in collusion with another model of the new R-series (by being placed on top of this), can be transformed into a magnificent Dolby Atmos speaker.

The granddaddy of the range, and the largest of the R-Series’ three floorstanding speakers, the R11 is an impressive feat of engineering. Standing at 1295.5 x 310.6 x 383.5 mm when attached to its spider-like plinth, its tremendous size is equalled only by its exciting ability to generate the highest quality of sound. The owner of four 165mm hybrid aluminium bass drivers, it delivers a stunning low-end sound unmatched for a speaker of its type and can hit 113dB at its highest point. These four imposing bass drivers sit either side of KEF’s iconic Uni-Q driver array, measuring 125mm (midrange driver) and 25mm (acoustic tweeter) in the R11.
Price: £4000 (pair) 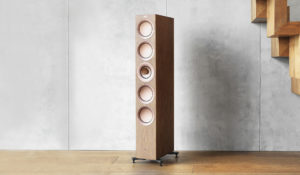 The next floorstander down from the R11, the R7 looks and sounds almost as stunning as its older brother. Perched on an identical plinth, it measures at 1108.9 x 310.6 x 383.5 mm. The fabulous Uni-Q driver array is once again present, with the difference between this mid-range product and its flagship companion being half the amount of bass drivers, with one sitting either side of the Uni-Q. Its maximum output also comes up a little shorter at 110dB. But that’s still highly commendable for a product that’s not even at the top of its range.
Price: £2,600 (pair)

The smallest floorstander of the three, the R5 stands, with plinth, at 1071.4 x 271.6 x 343.5 mm. But the only other thing it really shifts on is the slightly-reduced size of its two bass drivers, which come in at 130mm. The Uni-Q remains just as powerful as its older siblings, and it’s equally capable of reaching up to 110dB. KEF clearly do not believe in compromise.
Price: £2,000 (pair)

Moving away from the floorstanders, the R3 is the only standmountable speaker to take its place in the newly-revised R-Series. But boy does it stand up to those behemoths. With Uni-Q array in place, it features the same stunning 165mm bass driver as the range’s more expensive models, the R11 and R7, proving that a reduction in size does not necessarily mean a reduction in power.
Price: £1,300 (pair) 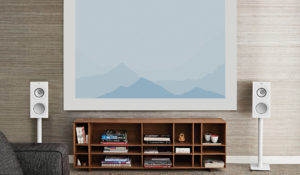 The R2c is the range’s dedicated centre speaker and is custom-made to operate right at the heart of any home cinema set-up. Sharing twin bass driver size (130mm each) with the R5 and the same awesome Uni-Q as every other R-Series speaker, it stands proudly to the task of presenting vocals and action in their purest, most precise forms. Not to mention its maximum output of 110dB. Just what will the neighbours say?
Price: £850

Bringing up the R-Series’ rear is the most adaptable and flexible speaker of the bunch. Designed in a distinctive wedge shape, the R8a can function alone or can be partnered up with one of its fellow R-Series speakers. Those searching for a surround speaker can mount this smartly to the wall and admire how the R8a’s 130mm midrange driver and 25mm acoustic tweeter can elegantly bring a film to life. For those less caught up in tradition, the R8a can be placed atop another R-series speaker to transform this into a Dolby Atmos device. Sound is then pushed upwards and, in conjunction with how we perceive sound, ensures of a more immersive and intensive film-watching experience.
Price: £800 (pair)

Every stunning innovation that calls the R-Series home has been beautifully concealed behind three different design choices. With either white, walnut or black to select from, buyers really are spoilt for choice. And, with the adoption of a “tone-on-tone” approach where all the speakers’ attributes are colour-matched, KEF once again prove that with great sound comes with great vision. There’s also an option to customise these speakers with additional microfibre grilles. How these grilles affect sound quality has again been accounted for in the KEF laboratory. Every aspect of the R-Series really is nothing short of brilliant engineering.

KEF have once again surpassed expectations by making prestige-quality products that bit more affordable. For those who’ve been put off by Reference prices, the R-Series is certainly a worth