Turning the page to the next chapter of turntable design, Elipson Chroma turntable range revisits what they know of clutter free vinyl listening with five new stripped back models. Building on the success of the innovative Alpha and Omega turntables, the new Chroma turntables consisting of the entry level 200 models, the 400 models which sit in the middle, and the flagship Carbon models provide a space for both traditional and modern specifications to excel.

The French brand is one of the pioneering acoustic manufacturing companies in France, with their hi-fi loudspeakers making their mark in the industry, loud and clear. Known best for their space-aged spherical speakers, Elipson’s recent take on turntables comes after the success of the first ever Bluetooth turntable, the Alpha 100. Made in France, and proudly, this range incorporates an ultra-connected design and meets the needs for both attractive aesthetics and quality engineering sought after by the modern day music enthusiast. 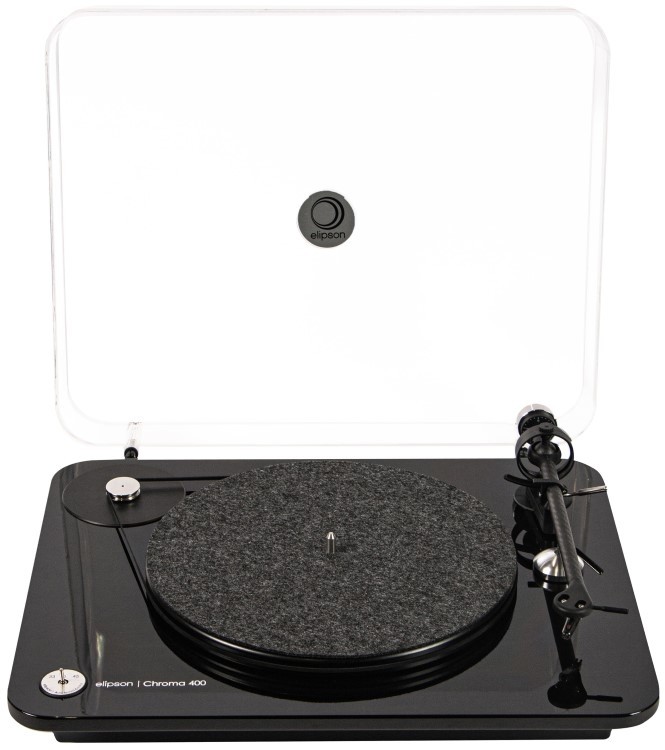 Elipson is France’s oldest manufacturer of loudspeakers. Founded in 1938, when technological advancements in audio amplification were first beginning, the brand begin as Multimoteur, a company dedicated to the manufacturing of electrical parts such as motors and transformers. It later became Elipson in 1951 and the company became the first in France to manufacture acoustic loudspeakers, starting with their elliptical shaped speakers which were then called Shells. Monumental in their craftsmanship, the BS50 speakers which contributed to Elipson’s valued reputation in the 50’s influence today’s Planet speakers. Building on a legacy that has become world famous for their spherical shaped speakers, Elipson’s combination of futuristic design and quality engineering make excellent additions to contemporary hi-fi systems.

Clearly masters in innovative and original design, it was no surprise when Elipson decided to venture in to new territory, premiering their cutting-edge turntables. Elipson developed the Alpha 100 turntable with a focus on technological innovation and the aesthetic factor that is every bit as important as its physical specifications. The result? The first ever turntable to be able to transmit a Bluetooth signal. This turntable represented the inventive and creative spirit of French craftsmanship, with a striking chassis, sleek, elegant and all blacked out for a complete style upgrade. Not dissimilar to the aforementioned model, Elipson Chroma turntables not only pay homage to this innovative design, but offer a purposeful array of new features for convenience and connectivity. 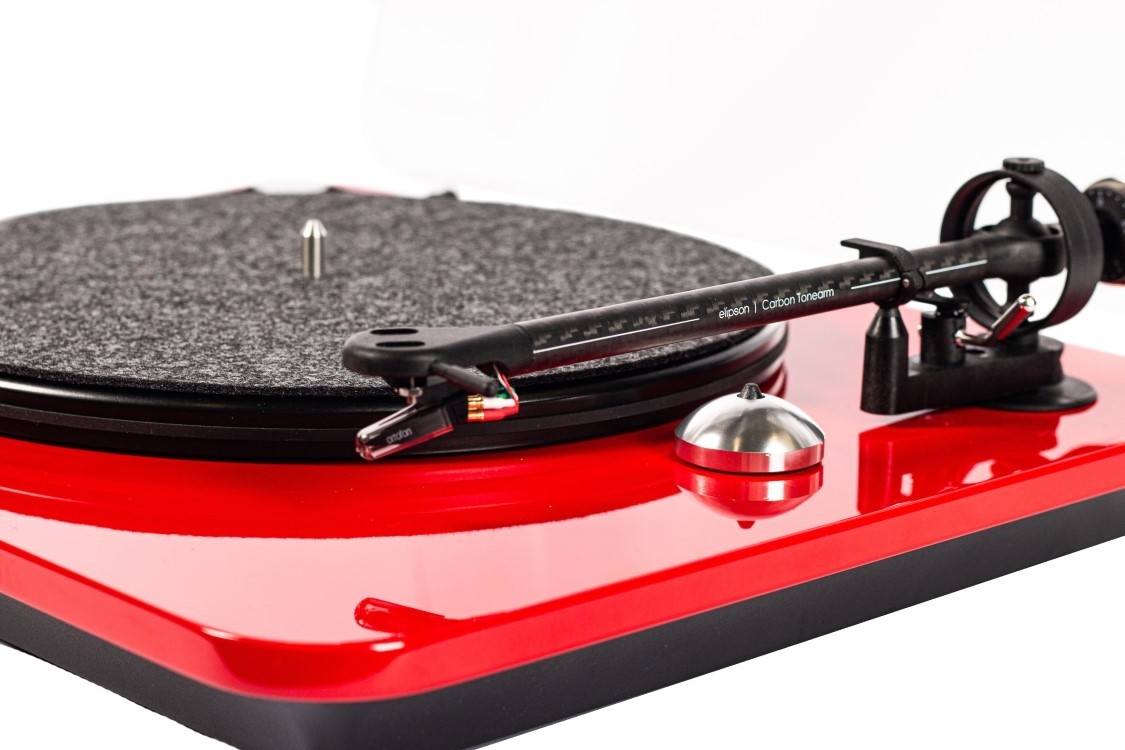 So what’s new with the Elipson Chroma turntables? These turntables adopt many design features from the Omega 100 and Alpha 100 models, so it is easy to draw comparisons to these prior models, so we will start with the key differences. Perhaps the biggest change in the Chroma models is the addition of a tonearm on every turntable. Whilst the 200 models feature the same PVC material for the chassis, the 400 and Carbon models have been upgraded with high quality PMMA. Whilst each model differs slightly in specifications, each line has a turntable which adopts a RIAA preamp and/or aptX Bluetooth technology. With performance in mind, the built-in phono stage with RIAA characteristics implements direct connection to your speakers, whilst the addition of Bluetooth allows for a wire-free set up!

Elipson upped the ante with the Chroma series, not only do the turntables become aesthetically enhanced and beautifully well connected, but integral developments to the technology such as inclusion of a new engine, engine suspension and rotary system make for silky smooth listening. The Chroma turntables also feature improved tray material, effortlessly elegant steel pressed plates, a graduation on the counterweight and free mechanical scale technicals. Elipson’s awesome turntable upgrades are implemented thanks to 4 years of  passionate research and development in engineering the highest quality turntables for exceptional vinyl listening. 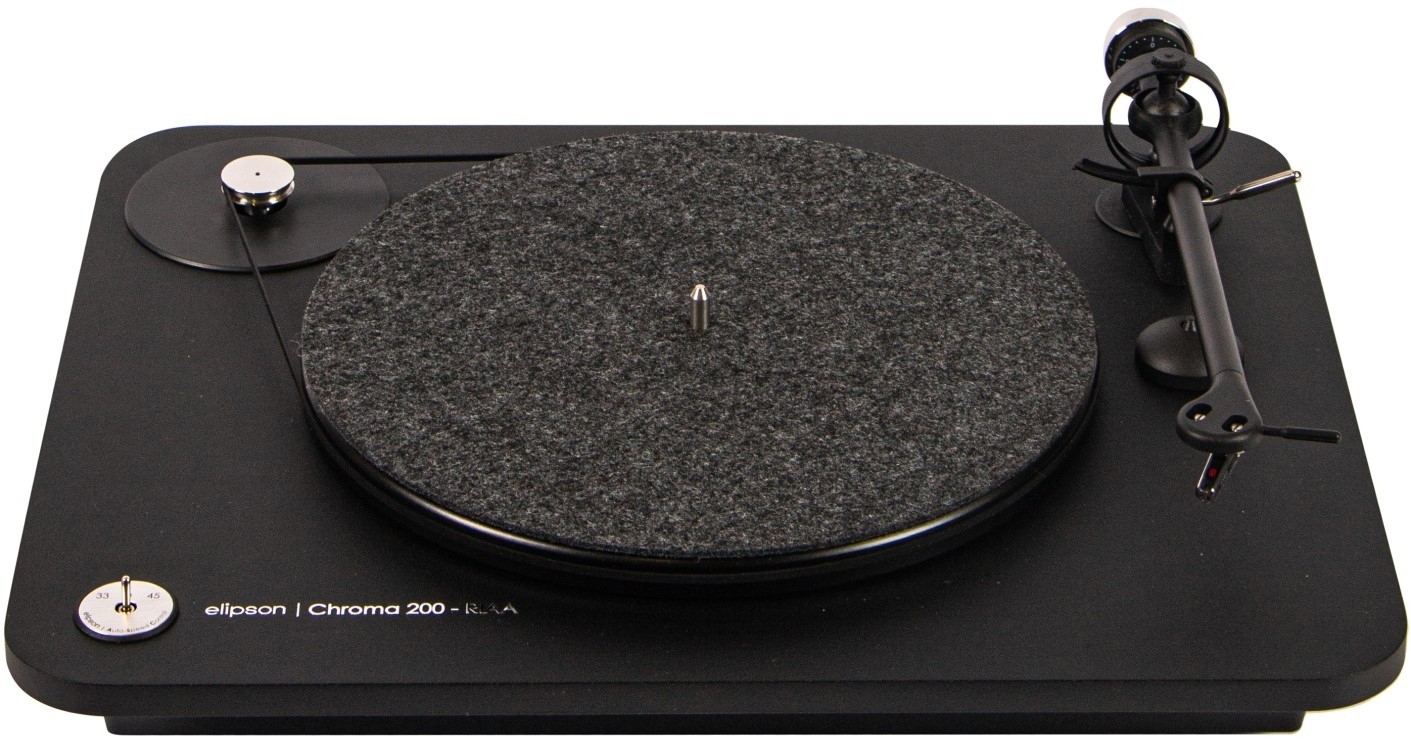 Starting of the range is the Chroma 200, 200 RIAA and 200 RIAA BT which are available in a matte black finish. The Chroma 200 is a strictly analog turntable, whilst the 200 RIAA the model incorporates a built in RIAA pre-amp and the RIAA BT comes with pre-amp, USB output and aptX Bluetooth technology. These models are constructed using PVC for the chassis and feature an aluminum tonearm with pre-fitted Ortofon OM10 cartridge for easy listening. As the entry level models, the 200 line is great for those on a budget but keen to enjoy the new benefits of the Elipson Chroma series. 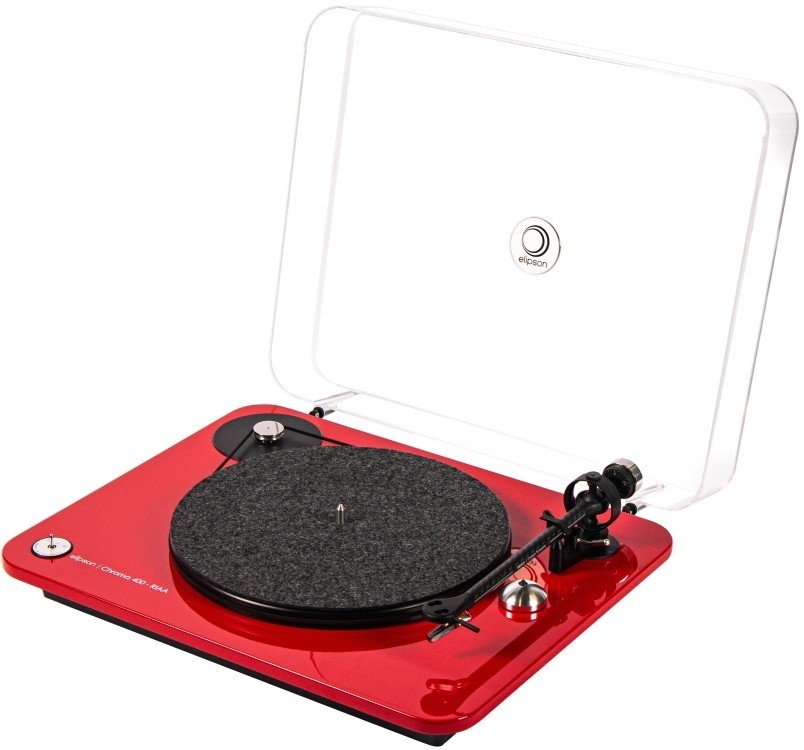 Similar to the 200 line, the three 400 models are the Chroma 400, 400 RIAA and 400 RIAA BT with the same features for each title. A step up from the 200’s, they sit in the middle of the range and feature a lacquered PMMA chassis, which is adopted from the Omega 100 turntable. The 200 and 400 RIAA BT models with aptX Bluetooth let you enjoy CD like quality music over a Bluetooth connection on your turntables when connected to a Bluetooth enabled device and your loudspeakers.  The 400 features a carbon lift arm, which is higher quality than the 200’s aluminium one and is available in glossy black, white and red colours. These models also feature a pre-fitted Ortofon OM10 cartridge.

At the top of the range, is the Chroma Carbon RIAA an the Chroma Carbon RIAA BT turntable. The ultimate turntables from Elipson’s Chroma range, they are constructed using high quality PMMA and feature the highly acclaimed Ortofon 2M red cartridge known for its spacious and dynamic sound. The difference between the Carbon turntables and the other models in the Chroma range is that they are finished in a carbon coating. This unique finish offers the ultimate sophistication and elegance known to the French company. This turntable is not one that will blend in with all the other components, it is a true feature in itself.

Which turntable is for me?

Whatever your turntable requirements are, budget, or aesthetic taste, the Chroma range has it all. For a truly analog turntable, the Elipson Chroma 200 and 400 has you covered. Benefit from the built-in pre-amp with the 200 RIAA and 400 RIAA and Carbon RIAA turntables for a more simplified setup. And for the ultimate vinyl experience with wireless connectivity, check out the 200 RIAA BT, 400 RIAA BT and Carbon RIAA BT. We think Elipson’s innovation and focus on aesthetics and user-experience make their turntables great competitors to the likes of Pro-Ject and Rega, and for this price point, we are truly impressed.

For a look at Elipson’s other products, go over to our main website and check out their Planet speakers, surround speakers, Dolby Atmos speakers, subwoofers and much more. Alternatively, click here to visit Elipson’s own website.