This week’s special feature on The Audio Affair Blog focusses on Anthony Gallo and the company and speakers which bear his name. As is frequently the case with unique and distinct products, the history of the innovation is often as interesting as the product itself.

Join us then won’t you, on the history of Anthony Gallo and his Strikingly Spherical Speakers….

From his teenage years, Anthony Gallo was obsessed by loudspeaker design, and spent many hours experimenting with varying loudspeaker designs; a process which was sometimes (literally) shocking in the discoveries the young Gallo would make.

Balancing day jobs as an engineer for Panasonic, and a thriving video repair business, Anthony Gallo’s dream of creating the ultimate loudspeaker was still burning very brightly indeed. So much so, he sold his business and his cars to fund the next stage of his loudspeaker dream.

After nine years of development, Gallo created his first Cylindrical Diaphragm Transducer; inspired by a magazine article on the properties of piezoelectric film, the CDT was to prove one of the key technologies associated with Anthony Gallo loudspeakers.

Anthony Gallo’s first commercial loudspeaker system was a monstrous, six component system. “It took special movers to get it from one sound room to another”. Utilising incredibly advanced cabinetry to eliminate resonances and internal reflections, led to enormous weight and cost.

It was time to try something new….

The design challenge was to design an enclosure which would at least equal that of his monstrous component system. The search was on for an inert, rigid enclosure which was lighter and more cost effective than the cabinets Gallo had been using up until that point.

“The problem was coming up with an equally inert enclosure. It had to be either very, very massive or incredibly rigid. It could not have any parallel walls and must minimise diffraction” It was at this point that Gallo looked towards the concept of using spherical enclosures.

The Sphere was found to have the best characteristics in terms of reducing internal diffractions, and was also, coincidentally, the strongest structure known. Unlike box cabinet speakers, the less mass the sphere had, the better it performed.

“Ironically enough, the 1.5 pound 12″ diameter sphere that was used in the Nucleus blew away the 300-pound monolith in terms of transparency and lack of cabinet coloration“. One thing was clear – the future was spherical.

The Nucleus is Born

Anthony Gallo had, by this time, been joined by a new business partner Gary Pelled; moving to the basement of a 100-year-old building in Brooklyn NY; the pair birthed one of the most unique speaker systems ever launched, The Nucleus. 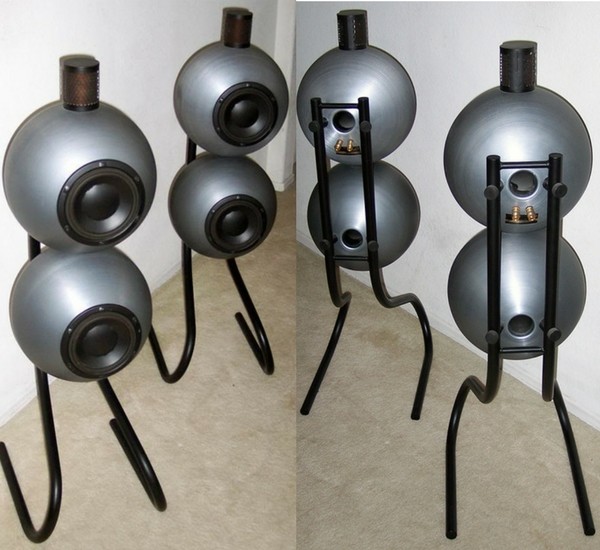 The Nucleus began gaining critical acclaim at various trade shows, such as the Las Vegas Consumer Electronics Show (CES) and other trade shows, although people were initially taken aback by the concept of a round loudspeaker. It was decided that rather than disguising the Nucleus’ futuristic shape, it would instead become an ultra-modern feature.

The Nucleus became a success, bringing with it a change of premises and a third partner, Don Fried. Just as things were looking rosy, the market changed; high-end two channel audio was being threatened by surround systems. Once again, an answer was required and neatly segues us into the current Range of Anthony Gallo loudspeakers….

Just as it was back then, the Micro can be used as part of a surround setup (partnered with one of the matching Anthony Gallo subwoofers) a multi-room setup, or anywhere a compact, stylish, high-performance speaker is required. 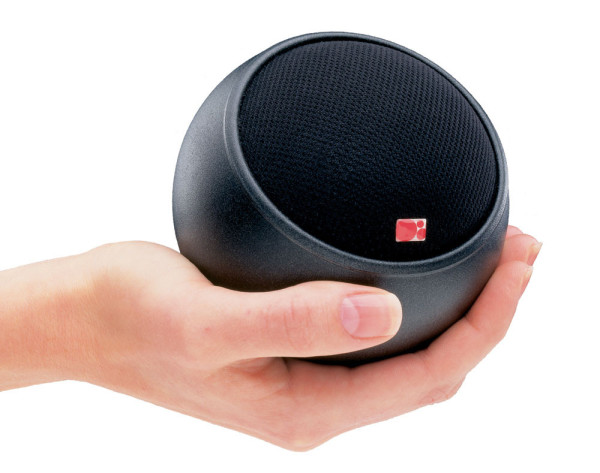 Available in a choice of colours, from minimalist silver through to canary yellow, the Nucleus Micro delivers the clarity and transparency which has become an Anthony Gallo Acoustics trademark, in a highly affordable (£149 each), attractive and compact package.

One of the key features of the Nucleus Micro is its versatile mounting options; ceiling mounting, wall mounting and most decoratively, stand mounting using the ‘wallflower’ stands are all easily achieved. The Nucleus Micro really is one of the world’s most versatile speakers. 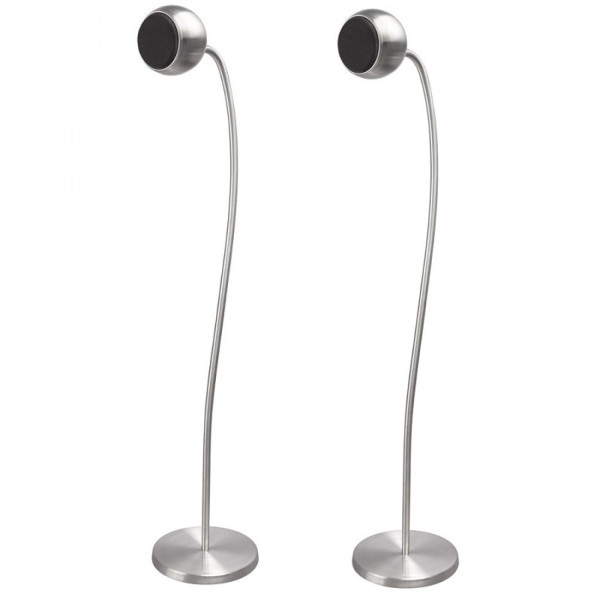 The Micro SE takes the ultra versatile, neutral enclosure of the Nucleus Micro, and pairs it with a proprietary flat panel driver; this gives the Micro SE a wider frequency bandwidth of 100hZ to 22kHz, creating a ‘super-micro’ Nucleus!

The combination of a wide bandwidth driver, no crossover to colour the audio, and the trademark Anthony Gallo spherical enclosure, takes the versatile, compact and stylish Nucleus and adds an ‘Audiophile’ edge to it. 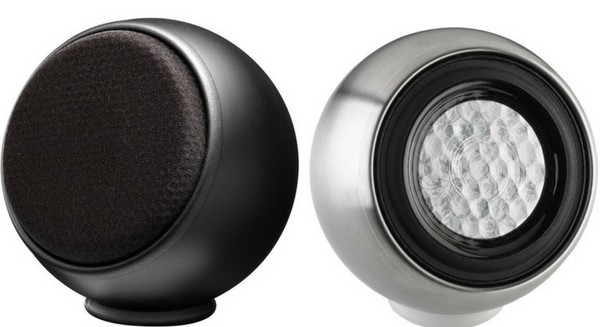 Pairing the acoustically neutral spherical enclosures, with the CDT driver, results in an extremely neutral sounding loudspeaker with exceptional HF dispersion characteristics, thanks to the CDT driver. What’s more remarkable, is that this is achieved without a crossover at all!

A frequency response of 68Hz to 20kHz (+ or – 3db) is quoted for the Strada 2, an extremely credible bandwidth for speakers of this size (barely taller than a record sleeve); one could legitimately use them without a subwoofer as a super stylish pair of main Hi-Fi speakers.

A special, horizontally oriented version of the Strada 2 is available, specifically for use as a centre channel speaker. As with all Anthony Gallo loudspeakers, stand, wall and floor mounting stands are available, allowing the Strada 2 to be incorporated with ease into your home. 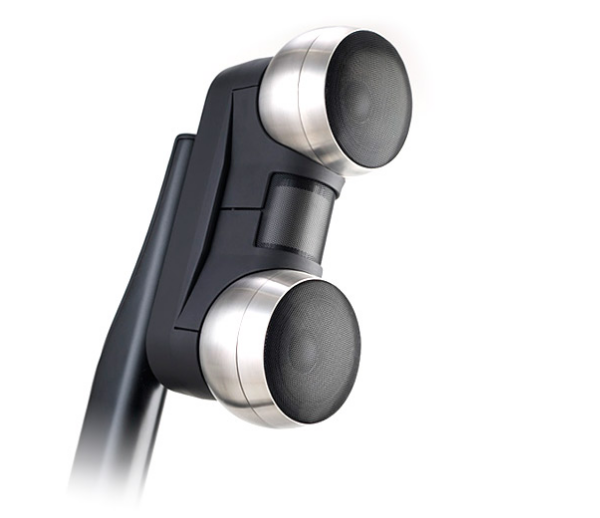 The Anthony Gallo A’Diva takes the Nucleus concept and takes it a step further with a newly designed, upgraded version of the Nucleus’ 3″ full-rage driver. The new driver design provides an extra half octave of bass; a two channel system without subwoofer being entirely feasible.

All the usual benefits of a spherical enclosure are to be found with the A’Diva (low distortion, neutrality and accuracy) which, coupled to the enhanced driver make the A’Diva a very serious, ultra compact loudspeaker design. 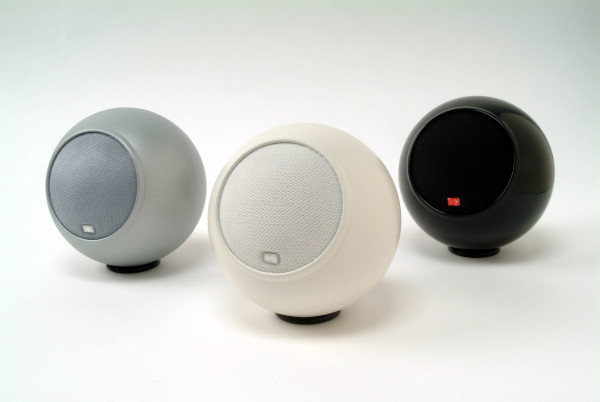 The Ultimate in ultra-compact loudspeakers? The Anthony Gallo A’Diva SE makes a good case for itself. Utilising a flat panel driver and a no compromise approach, the A’Diva achieves an exceptional bandwidth (for a speaker of this size) of 80Hz to 22kHz.

Once again, no subwoofer is strictly required making the A’Diva SE one of the top choices where outstanding Hi-Fi reproduction is required with a tiny footprint and in a stylish, modern package. 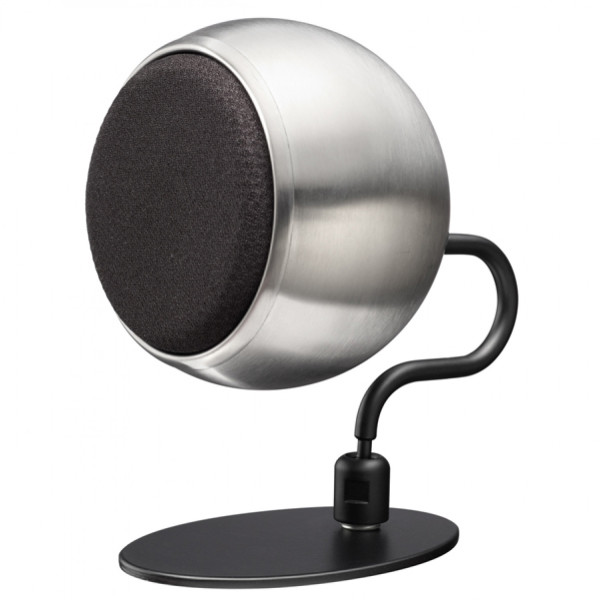 If this article has whetted your appetite for the Spherical Advantage, please contact us at Audio Affair. We’d be very happy to discuss your requirements.