Canadian amplification specialists, Anthem, specialise in providing AV receivers with the kind of build and sound quality one would normally expect of a high-end Stereo amplifier. No more is it necessary to ponder the quandary of multichannel surround “wow factor” versus audio purity; Anthem AV receivers deliver on both fronts. 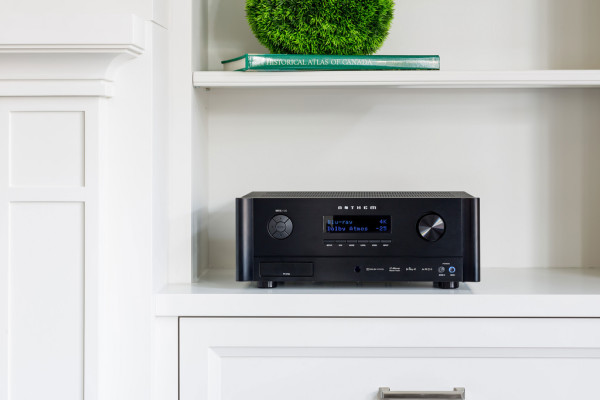 Now in their third iteration, Anthem’s successful and acclaimed MRX range of AV Receivers set out to end the preconception that multi-channel AV receivers can’t offer the same audio purity and Audiophile credentials as a dedicated, two-channel amplification system.

The Canadian company are experts in the field of high-performance amplification and in pre-amplifier and signal processing. All of this expertise and knowledge is wrapped up into the Anthem MRX series of AV receivers. A range which offers outstanding performance with all of the convenient AV receiver features you’d expect…and some you wouldn’t!

The burning question, however, is which model in the Anthem MRX line offers the best “bang for buck”? Where should the value-minded AV Receiver purchaser place their hard-earned cash? Allow us to suggest to you the Anthem MRX 720…

The Anthem MRX 720 is the “mid-range” receiver in the MRX line-up; sitting above the entry-level MRX 520 and below the flagship MRX 1120. It’s often the case that the “mid-range” offering in a series offers the best value, if not the outright, ultimate performance of its bigger brethren.

It was back in May that we covered the MRX 1120 on The Audio Affair Blog; its combination of eleven high output, high-quality amplifier channels, plus a fully fledged 11.2 Dolby Atmos preamplifier impressed us greatly; as did the remarkable ARC room correction facilities, which allow the receiver to automatically compensate for room acoustics.

What if your requirements for a receiver don’t require the full eleven channel bombast of the MRX 1120, however? What if I told you that the Anthem MRX 720 offers essentially the same preamplifier with a slightly more stripped back amplifier section, for a considerable saving?

In essence, the Anthem MRX 720 offers all the same features and advantages of the range-topping MRX 1120 (see May’s MRX 1120 blog for the full lowdown) but with the Dolby Atmos “height” amplifier channels deleted. However, should one wish to expand to a full 11 channel atmos setup further down the line, that’s still a possibility.

As the Anthem MRX 720 includes the same 11 channel receiver pre-amplifier and processing as it’s bigger brother, one can still expand to incorporate the extra four atmos height channels, using the provided preamplifier outputs, and external amplifiers. The seven channels of amplification incorporated, are the equal of those of the 140w per channel MRX 1120.

One might be tempted by the entry-level MRX 520 Receiver, which is an excellent 5.1 surround receiver, however, the MRX 520 only incorporates a basic, 5.1 receiver preamplifier. As such, it will never be capable of Dolby Atmos reproduction, unlike the MRX 720.

Once again then, it appears that the Mid-Range Sweet-Spot paradigm holds true; with the Anthem MRX 720, one can buy into one of the best quality AV receivers made today, safe in the knowledge that full 11 channel Dolby Atmos performance can be accessed as and when the means and desire present themselves.