Wharfedale: One of the most historic, and important brands in the history of Hi-Fi. From Bronze to Diamond, we chart the 85-year history of Wharfedale.

Within every marketplace, there exist brands which defined the sector; brands with a history of innovation stretching back to the very beginning of that market’s inception. The world of Hi-Fi is no exception to this rule, and in today’s Audio Affair blog, it is my privilege to write about one of the oldest Hi-Fi brands there is: Wharfedale

Without realising it, the odds are that right now, the music equipment you’re listening to owes an enormous debt of gratitude to the pioneering technical developments which Wharfedale brought to the market.

So, as we frequently invite you to do, dear reader, please pull up a comfy chair and join us for another of our historic journeys into Hi-Fi past. Are you sitting comfortably? Then let us begin… 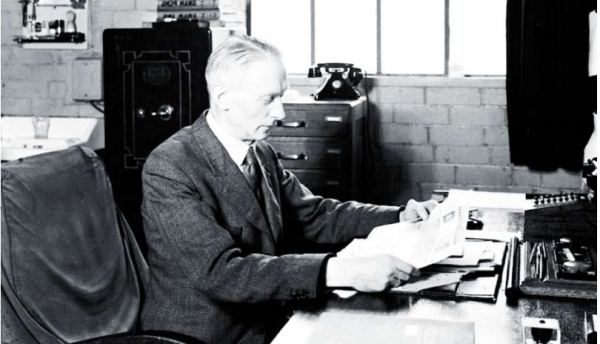 The year is 1932; in the cellar of a house in Ilkley, Yorkshire, music enthusiast and audio experimenter, Gilbert Briggs, is building his first loudspeaker units. Briggs was one of the new breed of amateur electronics engineers, experimenting with what was, at the time, cutting edge technology.

Briggs’ endeavours, however, proved to be far from amateurish, and no doubt aided by a musical ear, Briggs’ hobby of audio experimentation was about to explode beyond the confines of that cellar, and create a reputation which would quickly spread far and wide.

Gilbert Briggs’ house was located in Ilkley, Yorkshire, in the valley of Wharfe, an area known, to this day, as ‘Wharfedale’; and so, it was to be that the name of his home area, became the brand with which Gilbert Briggs was to change the face of Hi-Fi. 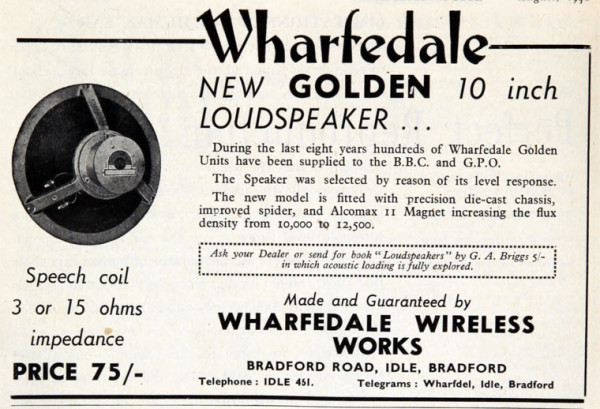 Fast forward just one year from Gilbert Briggs’ experiments in his cellar to 1933, and things are looking exciting for the fledging ‘Wharfedale Wireless Works’. A modest concern, based just outside of Bradford, Gilbert Briggs began manufacturing transducers and electronics in typically British ‘cottage industry’ manner.

Gilbert Briggs’ wife, Doris Edna Briggs WAS the production department, back in those early days; Doris reportedly spent many late nights hand winding and soldering voice-coils for the new Wharfedale loudspeakers. Doris must have done an excellent job, as the fame of these early loudspeaker drivers was travelling fast.

Later that same year, Gilbert entered his loudspeakers into Bradford Radio Society’s annual competition, where he won both first and second place. This success earned Wharfedale their first major order, and pretty soon, there was no looking back.

The onset of WW2 saw Wharfedale handling a huge amount of sub-contract work for Marconi. Thankfully, Wharfedale moved to new premises just before the outbreak of war, buoyed by increased demand for their loudspeakers.

Post-War, both at home and in America, wartime developments in electronics had sparked a nascent interest into ‘High Fidelity Audio’. Wharfedale seized upon this interest and used a number of technological developments to put them squarely in the ‘Hi-Fi Limelight’.

Two-way and multi-component loudspeaker systems had been attempted in the 1930s; they were however solely the reserve of cinemas and theatres, due to their size. In 1945 Wharfedale launched a two-way loudspeaker system, small enough to fit in a family home, even if the external crossover did require two people to lift it! 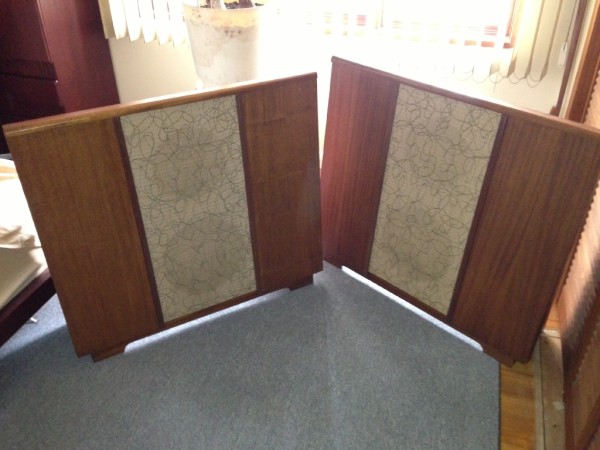 These demonstrations cemented global recognition of Wharfedale as a manufacturer of outstanding loudspeaker systems. Gilbert Briggs also published a guide entitled ‘Loudspeakers: The Why and How of Good Reproduction’. It was a sensation, being reprinted numerous times and spreading Gilbert Briggs’ fame worldwide. 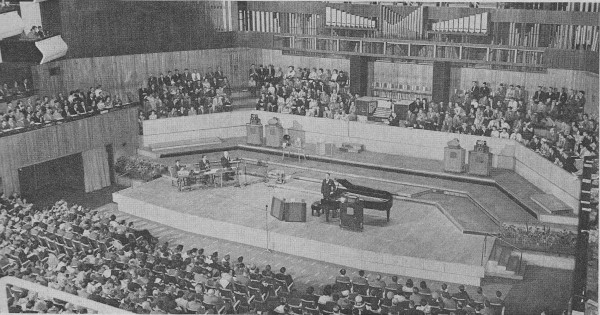 At the tail end of the 1950s, Wharfedale was sold to entertainments giant, The Rank Organisation. Two major innovations occurred in the Rank era: Wharfedale pioneered the use of ceramic magnets, and at a similar time, introduced the ‘roll surround’ on speaker cones.

Demand was increasing such that a move to a larger production facility was necessary, and so in 1967, Wharfedale moved to new premises on Bradford Road. Times were changing, and a new breed of customer was developing out of the ‘baby-boomer’ generation.

Young, upwardly mobile professionals desired equipment which not only sounded good but looked good in their homes, too. This was the era of the Bookshelf Speaker, and models such the Linton and Denton were soon to define the future output of Wharfedale. 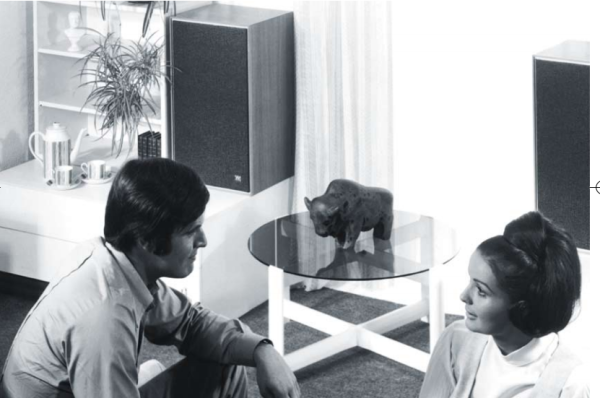 As Wharfedale entered the 1980s, Wharfedale embraced new analysis technologies such as Laser Holography. These new, high-tech, computer enabled processes enabled a much great degree of loudspeaker evaluation and a deeper scientific understanding of loudspeaker technology. Loudspeaker design had taken a step away from being a ‘black art’ and closer to being a science. 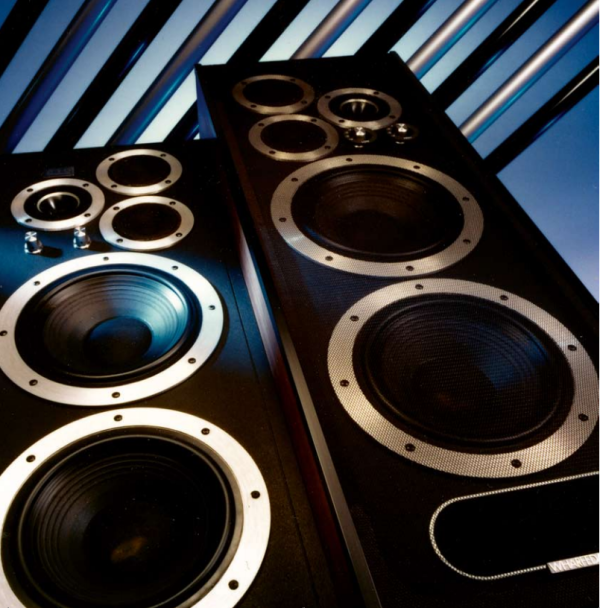 1982 saw the launch of what can only be described as a legend in the history of home audio: The Wharfedale Diamond series. The original, Mk1 Diamond was launched in 1982 and borrowed heavily from technology developed for Wharfedale’s high-end TSR102 series loudspeakers.

Utilising one of the TSR102’s drive units, with a simple soft-dome tweeter, placed within a highly compact, rear ported cabinet, it was an unlikely recipe which proved to be an immediate hit. What Hi-Fi at the time remarked, “for their size they sure produce a big sound…they sell for £65 and so get an excellent value for money rating“. 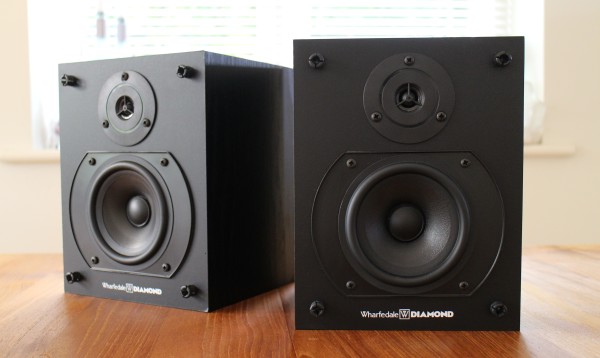 As Wharfedale entered the 1990’s, Wharfedale parted from its parent company, The Rank Organisation, and was purchased by the Verity Group, which also owned Wharfedale’s old friends Quad and Leak. The Famous three were once again united – a fitting outcome for three of Britain’s most famous Hi-Fi innovators.

Wharfedale have been consistently redesigning and improving the Diamond since its introduction in 1982. The Wharfedale Diamond 4 was perhaps the first aesthetically notable redesign, with each generation keeping apace of changing design trends and innovations.

In the early 1990s, Wharfedale, by this point part of the International Audio Group with Quad and Leak, had redesigned the Diamond yet again creating the Diamond 8.

Featuring a woven, yellow, Kevlar driver, the Diamond 8 offered ‘high end’ technology, once again, at a bargain price point. By this stage, the Diamond series had swollen to include floor-standers, centre speakers and a subwoofer, appealing to the emerging AV market.

By the mid-90s, the Diamond had evolved again, to the Diamond 9 – a range which scored an incredible clean sweep of awards, year after year. The core, Diamond values of affordability, great value and performance beyond the price point, ensuring widespread accolades. 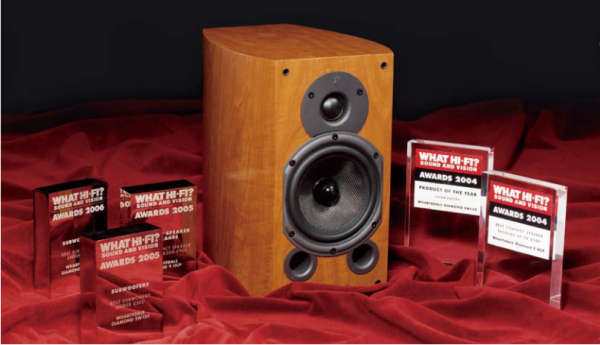 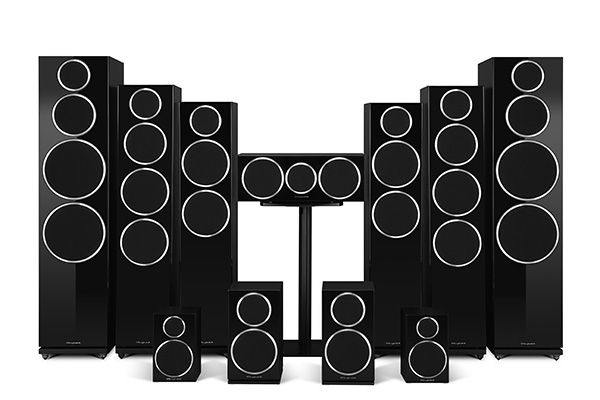 Continuing with the modern tradition, founded by the Diamond 8, of a woven Kevlar cone, Wharfedale’s extensive R&D efforts have resulted in ever improved driver design and cabinet construction. The cabinet, in particular, makes use of an extremely dense composite with redesigned porting to reduce port noise. 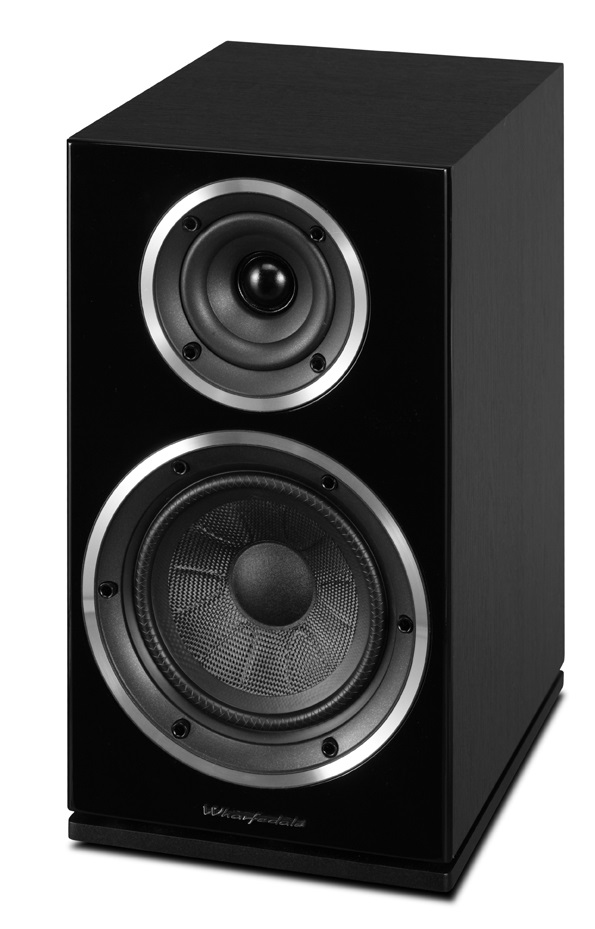 Improved crossover design, stronger magnets, all this, coupled with the other design advances incorporated in the 200 series add up to another Diamond series loudspeaker, capable of punching beyond its price point. As Hi-Fi World put it:

3 thoughts on “A History of Wharfedale Loudspeakers”